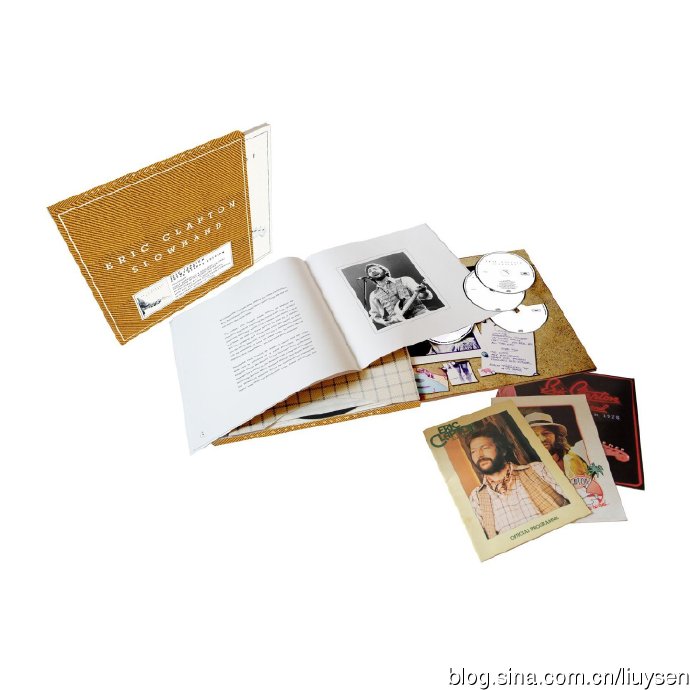 Slowhand is Eric‘s most successful solo album from the ’70’s, and not without good reason, although as the first 3 tracks became hit singles and live set staples, it developed something of a ‘greatest hits’ feel – “Cocaine”, “Wonderful Tonight” and “Lay Down Sally” became so familiar that the numbers which follow seemed to be eclipsed and the album started to sound unbalanced (unlike on its original release). 35 years on, this expanded double-disc edition is a welcome opportunity to revisit what remains one of his best-selling albums, having now had the ‘deluxe’ treatment.

Disc 1 includes 3 previously unreleased out-takes from the album sessions, along with a solo version of “Alberta”, which appeared on Blues. These are all interesting tracks but, as with most out-takes, the reason they didn’t appear on the original album is that they just weren’t as good as those that did. An interesting listen none-the-less. Actually, I like “Stars, Strays And Ashtrays” and can’t help picturing Eric singing it sitting at a lonely bar in the deep south (Baton Rouge, not Bexhill-on-Sea).

Disc 2 is billed as the “Best of” Clapton’s live set from the Hammersmith Odeon (27/4/77). For most, the main reason for wanting to have this Deluxe Edition will probably be the 5 previously unreleased tracks, “Steady Rollin’ Man”, “Can’t Find My Way Home”, “Badge”, “I Shot The Sheriff” and “Layla”. “Steady Rollin’ Man” – one of my favourite numbers from 461 Ocean Boulevard – really rocks, although Eric’s main solo sometimes promises more than it delivers. Ironically, one of the highlights of this set is when Clapton hands over to Yvonne Elliman, for a deeply moving “Can’t Find My Way Home”. Listeners of a nervous disposition are warned that “I Shot The Sheriff” descends alarmingly into a lengthy drum solo (apologies to Jamie Oldaker and appreciative drummers everywhere!). “Layla” is Eric’s ‘first half’ version without the keyboard ending and “Badge” really rocks too.

Of the other 4 live numbers, “Further On Up The Road” appeared on Crossroads and “Tell The Truth”, “Knockin’ On Heaven’s Door” and “Stormy Monday” appeared on Crossroads 2. This is where the main disappointment lies with this edition, as over 30mins. of the live material has been released previously. The Super Deluxe version contains 5 more unreleased tracks from the show and if the opening three numbers on that release (“Hello Old Friend”, “Sign Language” and “Alberta”) effectively eased Eric gently into the set, “Nobody Knows When You’re Down And Out” and “Key To The Highway” – which come later – would have been welcome additions to the Deluxe Edition. Still, if you don’t have the Crossroads box sets you won’t be disappointed with what is included.

The package is very nicely presented – although the discs are even harder to extract from this latest version of the digi-paks (and without the plastic sleeve of earlier versions, they don’t look so “deluxe”) and there is a glossy 16 page booklet with an essay by David Hepworth, telling the story of the recording session, along with photos and some extra recording details. This latest remastering sounds good to me on a first listen – I haven’t compared versions, although from memory Carl Radle’s bass now sometimes sounds to have more presence (a definite plus point). Where did those 35 years go? Answers on a postcard please …